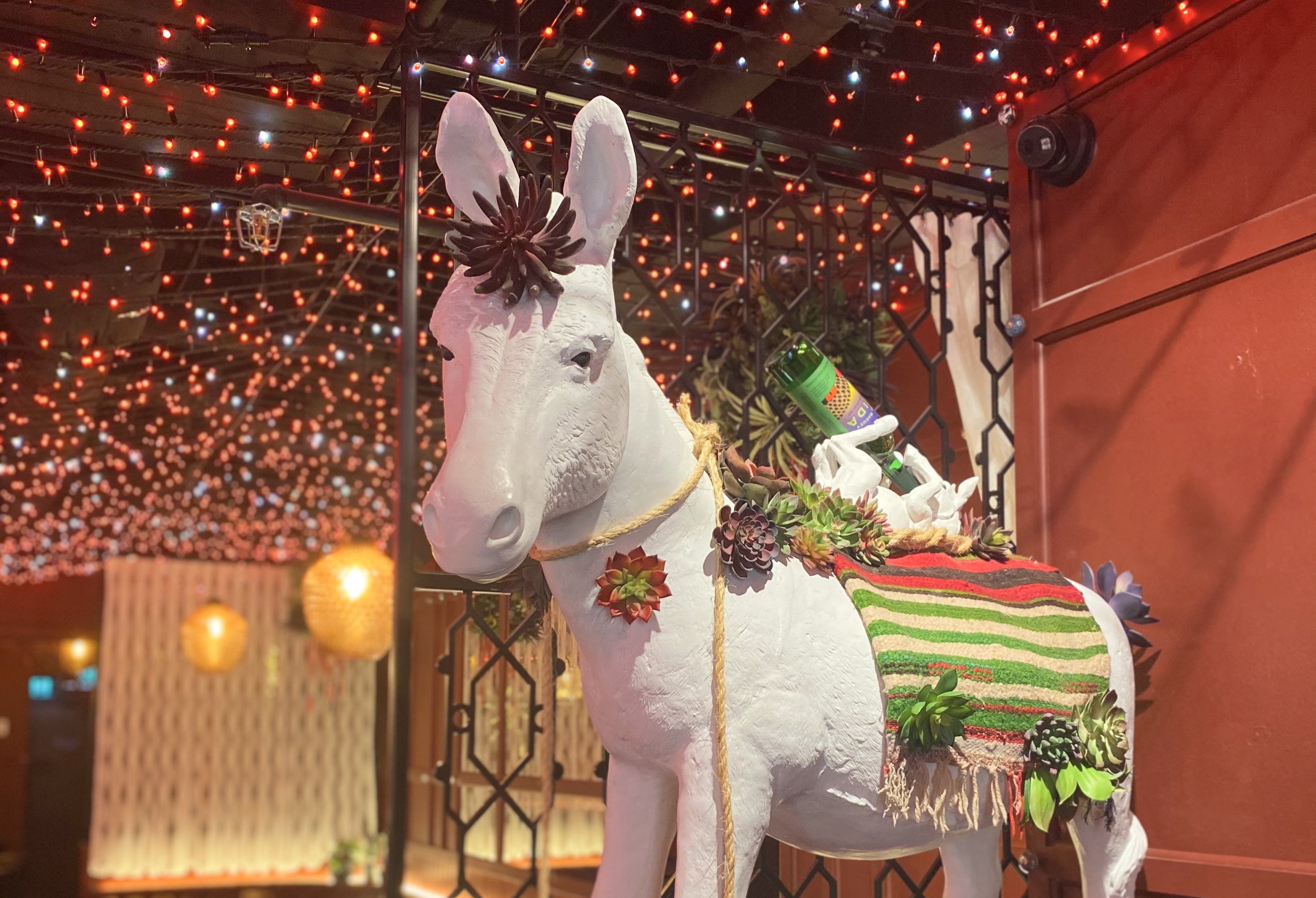 Can you recycle receipts?

Hidden away in one of the latest and greatest Auckland precincts, Commercial Bay, is Ghost Donkey. Cocktail lounge by weekday and fiesta bar by weekend – this hotspot is quickly becoming a city staple.

With the largest mezcal and tequila collection in Auckland, Ghost Donkey seeks to disrupt what Kiwis commonly know the spirits to be – showing their visitors just how luxurious the liquors can be. Brace yourself, the magic doesn’t stop there. They are also reviving Mexican cuisine in New Zealand, with recipes coming straight from their executive chef – a Michelin starred culinarian their New York Restaurant.

We love the flavour Ghost Donkey brings and wanted to know more, so we sat down with Venue Manager Hannah Corkery who gave us a rundown of all the need-to-knows!

Tell me a little bit about the place?

We have an area out the front that opens at 11.30 and then our bar area opens at five. We kind of want to keep it a little bit mysterious in here. We don’t want toddlers running around, want to give it more of a bar vibe. The patio has got a beautiful view as well so people can sit in the sunshine out front for lunch. The location is pretty amazing.

What makes this place unique?

The main kind of thing we're trying to do is re-introduce mezcal and tequila to New Zealand. I think there's a lot of preconceptions that tequila is just something you shot back on a night out, and that mezcal is just a smoky version of that. So what we wanted to do is create a space where it's not intimidating, and you can try these really unique spirits and cocktails. So all our house cocktails have mezcal – which I think, particularly before we opened, was a really foreign idea to a lot of Kiwis.

Our whole ethos is based on Mexican hospitality. So anybody, from any walk of life can come in and get a big “hello, come sit at the bar!'“ whether it’s from the bartender, waiter or chef. It's that sense of being invited into the space.

We’ve got fairy lights and when the shutters come down, you really can lose that perspective of time. It’s awesome for us to be able to take people on both the culinary and beverage experience, in this pretty amazing space.

How long have you been open?

We have been open for about eight months. So fairly fresh. So we opened with a whole precinct opened up. Initially, we were supposed to open just before we went into lockdown, so it was just after the first lockdown.

I don't know if everybody would agree, but it was pretty amazing to be able to get those extra couple of weeks. Because very rarely when you're opening venues, do you get extra time – you're usually kind of chasing your tail to catch up. It gave us time to really train the staff on what we're trying to achieve and put some systems in place before we opened. Not that they all worked but it was a nice attempt.

What was what's the journey been like since opening?

When we opened, it was just crazy in here. Ten deep at the bar, big sort of Fiesta kind of feels. Throughout the week, the space really changes. Sunday through Thursday, it's a cocktail lounge in here. So you can come and have one-on-ones with the bartenders and they'll talk you through all the mezcals, you can do tastings and try the food.

Then Friday and Saturday from like 9 pm, it just goes like full-on fiesta in here. We've got a costume box, the bartenders are on each other's shoulders, all these lights swing, tables come away, and it becomes a real kind of party in here. So when we first opened, it was like that all the time. It was just like madness in here. And now we've kind of got the reins on it a little bit better and are able to provide that one-on-one experience, even when it is crazy like that.

It's really nice for people to be able to see it as those two things and have two personalities in the same venue. We were a little bit worried about that. That it would be seen as just a party place or just a cocktail lounge. However, the transition between 8, 9, 10 – when the tables get whipped away and the DJ comes out. There’s something pretty special about it.

We're licenced until 3 am. So it can go really late here. We are probably the latest venue in the precinct – just because it is the only ‘bar, bar’. The shutters come down so you have no idea what time of day is it, you step into this time-warp of a party. It tends to be Fridays and Saturdays that are the big nights in here, but if people want to party on a Wednesday, we can provide that.

From your cocktail range, what’s your favourite?

My favourite would probably be the Pistolero. A lot of the ingredients that they use in the Ghost Donkey’s in the states come directly from Mexico. For us, that is a little bit harder to source. So what we're trying to do is use local produce, either the same produce that's locally grown or something close enough that we can get our hands on to. So that one has got a capsicum, or poblano chilli, sherbert, mezcal, lime. It's kind of almost like our take on a chilli Margarita. It is delicious. Dangerously good.

What do you think would be the most popular?

Probably our Stealth Margarita – that's our frozen Margarita. It's got cucumber puree, St. Germain liqueur, which is like an elderflower liqueur, then all of your classic margarita ingredients. It’s super refreshing. Great in Auckland’s weather. Inside, outside, frozen margaritas are a hit everywhere. They fly out the door.

Do you provide food as well?

Yes, we do. Pretty cool little menu – quite concise. It’s sort of divided into three sections: tacos, not tacos, and nachos. The idea behind the food was that everything should kind of be able to be in with your hands. What we were really trying to do is I think a lot of Mexican food in New Zealand is quite bastardised. So people often see nachos as mince with sour cream and guacamole and stuff like that. Tacos for Kiwis come in a flour tortilla. So what we did is introduce black corn tortillas to a lot of people, which initially they were a bit dubious about but it seems to be going really well. It's the kind of more authentic way to eat Mexican food.

All the recipes come from the executive chef who is Michelin starred in New York, so they're all his recipes. Again, we're not able to get a lot of the ingredients that they get over there. So what we do is work with local suppliers just swap things out to make sure it's fresh and local. That's something we're really passionate about. There's no point trying to recreate what they are doing over there, shipping ingredients in from Mexico when we have a beautiful country with beautiful produce. We’re pretty lucky.

It’s great that the food and drink options complement each other.

Definitely! You want to fill your table up with things to share. It's kind of like snacky sharing, that's the way behind it. You come with a bunch of girlfriends get a round of cocktails and guac, some tacos and ceviche. We are super proud of the food. We are super food heavy in the day and during the early dinner rush, but then people just tend to snack as it gets later.

It’s street food. It's unpretentious. It’s generous. It fits into that Mexican hospitality. We are definitely trying to steer away from that Tex-Mex thing, which I think is quite common in New Zealand. That’s been really enjoyable, again, along with the mezcal and tequila, reintroducing people to what Mexican food really is at the core.

Do you guys have any deals or events?

Day of the dead is a huge event for us. Last year, we had a margarita fountain and face painting and a mariachi band.

Deals wise we've got a tray lunch. They come on a big metal, almost canteen-like tray. You'll get like a little bit of guac and tacos – you can add a mezcal or stealth Margarita. That's just at lunchtime, to really drive that period.

Can you recycle receipts?