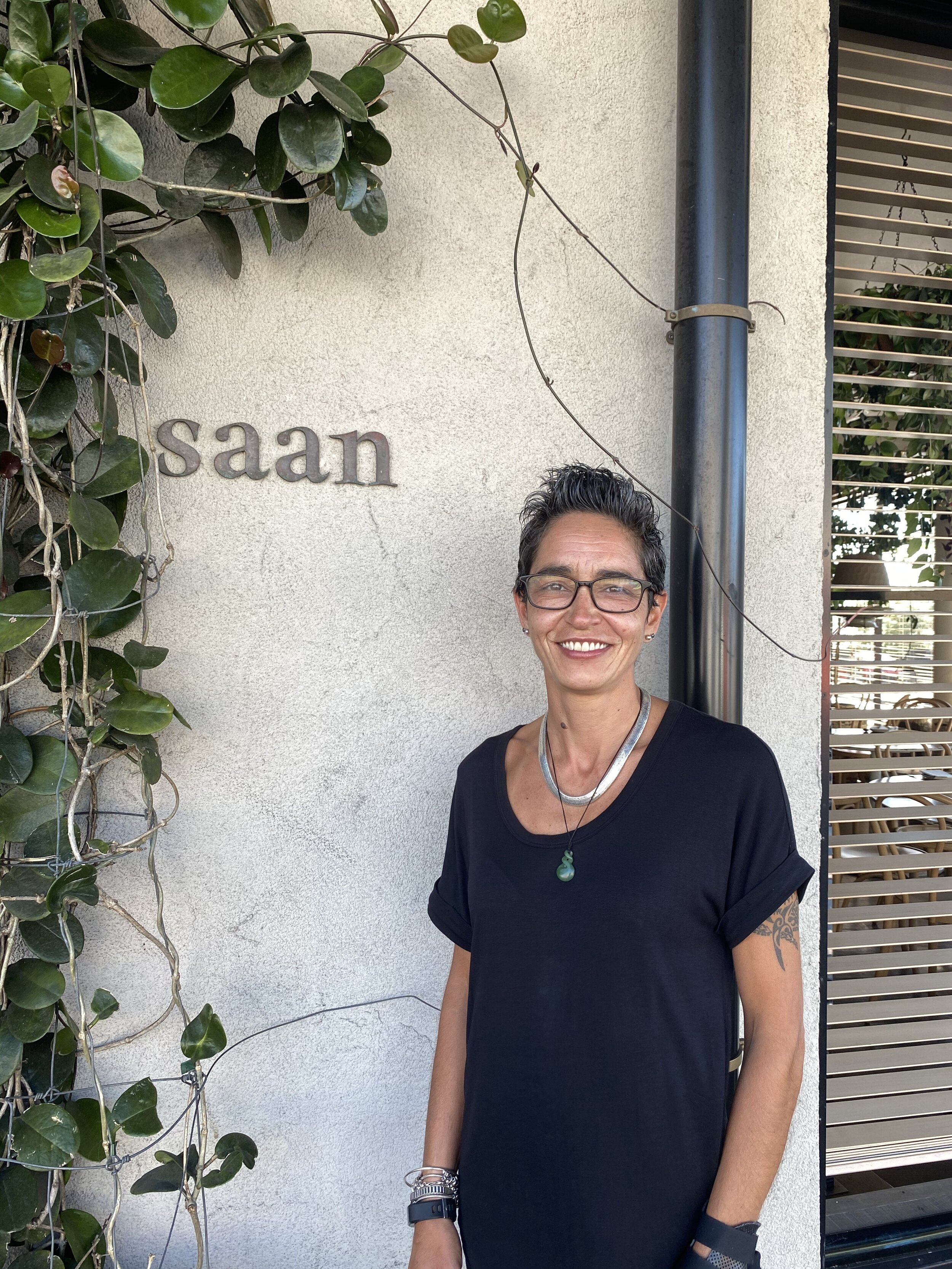 Merchant Monday: Bite into a slice of France

Settled up in Ponsonby, Saan serves up authentic Thai food, not only recognised by the regulars who keep on coming back but also with the multiple awards their food has won and been nominated for.

Covered in luscious greenery, Saan encapsulates easygoing elegance. It whisks you away into total relaxation, leaving behind the bustling streets outside. With good food, warm staff and a tranquil ambience – what more could you ask for?

We sat down for a chat Restaurant Manager Anja Otto, who told us all about:

Can you tell us about Saan?

Saan has been open for five years, and serves authentic Thai – it’s actually an award-winning Thai restaurant owned by Comensa - Krishna Botica and Tony McGeorge. Krishna is a bit of a hospitality legend, so we have a strong brand behind us. Cafe Hanoi is our sister restaurant.

We have a couple of dishes on our menu that have won awards – our soft shell crab, the massaman curry.

We could look like this beautiful site but we cater to everyone from fine dining to casual, we can have people sitting in Minx and then have somebody in flip flops just coming in from the beach, you know. So it's a very relaxed environment, that we adjust as people want.

In terms of food, it’s on the spicier side. But we accommodate a lot of allergies, including a lot of vegan dishes that are even on our main menu. We're trying to do things that you wouldn't normally find in Asian restaurants. So before COVID, we had meat-free Mondays, where we wouldn't even cook any meat. So doing a lot of things that are trying to encourage people to eat more plant-based protein. So we're not just a Thai restaurant.

Aside from that, what do you think the point of differences from other eateries around you?

We do it authentic. We don't cut corners. You're going to get Thai food here that most people have never tried. They think they know what Thai food is and then they have ours.

I mean, we've got a couple of dishes that are quite known, like the Green Papaya Salad and Pad Thai, but then we've got a lot that people have never tried. We just try to do the best we possibly can, using a lot of Asian ingredients. We started off being extremely spicy and very authentic. But I mean, the last few times I've been to Thailand, the amount of spice just dropped.

Yeah. When I went 20 years ago, you could hardly eat anything because was so hot. You had to ask for it to be lowered, but now you have to ask for it spicier.

So we try to reflect that. There are so many Thai restaurants around here that are doing more fusion style. We try not to do that, you know, we don't substitute green papaya with carrots, it's just not gonna happen, and we rather not do it.

We do incorporate a range of different ingredients like goat, ant eggs, crickets, stuff like that. Right now we are also preparing other specials, where we are going to do more themes. Four weeks of curry nights on a Sunday, things like that. I tried one of them the other day and oh my gosh!

So yeah, we definitely different in that term. In terms of space, we have got different things to offer. We can serve you fine dining but we can also give you a private room. There is even a private room for two people. We’ve also had weddings here!

So, what's the journey been like since opening here?

It's been amazing in terms of changing people's perception of Thai. For me, every day we are still serving people who think they know the cuisine, and they are like, ‘Oh, my gosh’. We had some people yesterday, they went to Thailand last year, just before Covid, and they were like, Oh wow, we didn't even have this in Thailand.

That's the other thing – we are trying to do dishes that are dying off in Thailand. Miang is very, very popular and has been for centuries because you can find it in the forest and have it with whatever you want. We started doing those wraps, and now if you see a lot of other places are picking up on that. So it's actually improved the standard of Thai food, especially in Auckland.

What's the most popular dish?

Our softshell crab with coconut sauce, no doubt. It won People’s Choice Award for Best Dish at the Metro Awards in 2019, and it's been on the menu since we opened. It will probably never come off. We've been nominated several times as well. People come back for that. Customers also love the massaman, which is award-winning as well. Besides those, the miang has become a favourite and our vegan dishes are a hit.

There's a brand new place down in Commercial Bay that has done the miang even more authentic than we have, but we have a reason for not doing so. The miang is a big leaf with whatever you want with it, betel is the authentic way of doing it however, we do it with perilla because we like the flavour better.

Down the road, is a vegan Thai restaurant, they only serve vegan food, and as soon as you look at the menu, you see similarities to us. People would think that's competition, but no. We are making Thai food more delicious – making it what it really is.

With the similarities across our eateries, people are no longer scared of trying more authentic parts of the cuisine.

What’s your favourite thing to eat on the menu?

Any dish that I can get my hands dirty. I like finger food, so the wraps, the miang, we have a whole feast that we can put out and you can make your own wrap. We are going to do a large format menu where you are doing the same but with pork belly. Things like that – I just love.

So this is a place you can come and eat with your hands?

Yes. Originally we were only Northern-Thai focused, we have now spread out a little bit more. In the North, you eat a lot of sticky rice, and sticky rice you eat with your hands. So you make a ball and grab whatever you need. That’s how you eat the soft shell crab. You’re not meant to eat it with a knife and fork or chopsticks, just with your hands.

It’s been a crazy year, what helped you guys through that?

We have two amazing bosses. Our bosses actually moved out of their house, lived with family and have been for the last year so they can cover our paychecks. We didn’t lose a single staff member. It was not until the next lockdown that we lost one, and they were an accountant, not somebody on the floor. Everybody has pitched in because they have been amazing. Krishna Botica actually just received an award for her work in the industry during Covid-19.

What was it like coming back out of those alert levels?

It was funny with Saan, we started doing takeaway at level three and we were busy as! Everybody just wanted curry. It’s not something that everybody just makes at home you know. It takes a long time, it’s difficult – so all of a sudden we were flat out. It was awesome, we were getting so much support. Whereas Cafe Hanoi didn’t have the students, didn’t have the tourists, didn’t have the corporates, so the traffic was low. Then we went into level two where we had the social distancing and we were packed. People were so supportive and it helps that we are very strict with our hygiene, so they were coming back. Now we only suffer because we don’t have tourists, so we are trying to engage local Aucklander’s and people around the area.

It has been a challenge because being in Ponsonby you are very affected by what’s going on – sport events, holidays, and there has been a lack of tourists.

What's happening now is that you have cafes and restaurants, in the suburbs and outside of Auckland in the countryside, shutting down because they can't meet the demand. They can't get staff because Kiwis don’t want to work in that industry. We have two adult Kiwis and the others are students – the rest of us are foreigners.

That’s not shown too much in the media…

It’s really bad. I just had a customer talking yesterday and he was mortified to hear that his local shop in Hamilton was shutting down because she couldn’t meet demand. She was so busy and couldn’t get staff in because they were stuck overseas. He was like, ‘well why don’t you hire locals?’ and she was like, ‘well they don’t show up’.

It is getting better though. Eight years ago when I moved here it was really bad. Now the industry is working on making it better. It’s tough with the industry, in general, having minimal pay and tips. Another thing that a lot of places are struggling with is that the cost of goods has increased, which makes it hard as well.

We have been lucky only because our bosses have been so proactive and were on to it straight away. Doing everything they could to help us and rejiggle everything. To them it was all about the staff, that’s who they are. We who work here, we are family. Most of us are foreigners, we don’t have family here. We have fun when we are here and rely on each other because we are a team. They are my second family.

Do you have anything coming up?

We have a new large-format dish, ‘Twice Cooked Side of Crispy Pork Belly’. People will need to pre-order this dish, as the preparation time is over 24 hours. It’s a set menu for sharing, made for 4+ people. It’s 1 kg of the twice-cooked pork belly, with vegetables, herbs and Thai roti.

Merchant Monday: Bite into a slice of France